Shin & Kim Named the “Regional Firm of the Year” by GCR

Shin & Kim has been selected as the “Regional Firm of the Year – Asia-Pacific, Middle East & Africa” by the Global Competition Award (GCR) at the GCR 6th Annual Awards held in Washington D.C. on April 5, 2016.

Earlier this year, Shin & Kim was also ranked as a Band 1 (top ranking) law firm in the competition/antitrust area by Chambers and Partners, a leading international legal publication.  Young-Chul Yim, Shin & Kim’s senior partner and the head of our Antitrust and Competition Practice Group, was named as a “Leading Individual” in Band 1, and John Choi, Shin & Kim’s senior foreign attorney, was named as a “Leading Individual.”

Our Antitrust and Competition Practice Group consists of over 50 professionals fully devoted to the antitrust and competition practice, including several former directors of the Korea Fair Trade Commission, providing effective and practical advice and solutions tailored to meet the needs of many domestic and foreign companies. 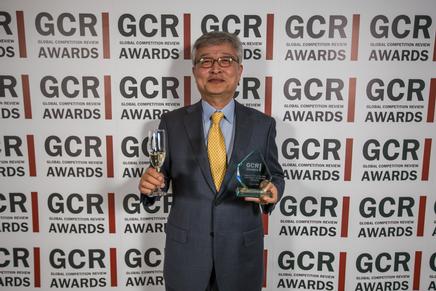