On 16 November 2017, Shin & Kim was named “Labour and Employment Law Firm of the Year” by Asian Legal Business (“ALB”) at the “ALB Korean Law Awards 2017” ceremony held at the Grand Hyatt Hotel in Seoul.

In addition, Shin & Kim’s real estate team was honored for having the “Real Estate Deal of the Year” for the second consecutive year.

In the area of labour and employment, Shin & Kim successfully defended numerous corporations faced with some of today’s most pressing labour and employment issues in Korea.  For example, Shin & Kim’s victories include: representing Ssangyong Motors in a lawsuit in which former employees requested to invalidate the layoffs, and “illegal dispatching” practices, and representing KT&G against subcontractor employees in a lawsuit for reinstatement of employment.

In the area of real estate, Shin & Kim provided its legal advice and services to AIG Global in its sale of Seoul International Finance Center (IFC Seoul) to Brookfield Asset Management, a global alternative investment management company, for the amount of KRW 2 trillion, 550 billion.

In accepting the awards, Shin & Kim stated the following:

“A few years ago, Shin & Kim separated its Labour and Employment Practice Group as an independent group and has been providing intensive support to achieve remarkable results.  In particular, Shin & Kim’s Labour and Employment Practice Group is unique in that it provides a one-stop service for the full range of administrative, judicial and corporate sectors because it consists of 20 experts who have experience regarding labor disputes in administrative (Ministry of Employment and Labor, National Labor Relations Commission), judicial (court) and corporate (in-house attorneys) capacities.”

The ALB Korea Law Awards are held annually by Asian Legal Business, a reputed legal media group in Asia, and were awarded based on evaluations from a private panel consisting of legal experts practicing at law schools, law firms, law associations and throughout the industry. 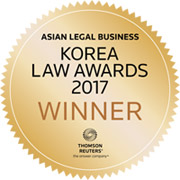